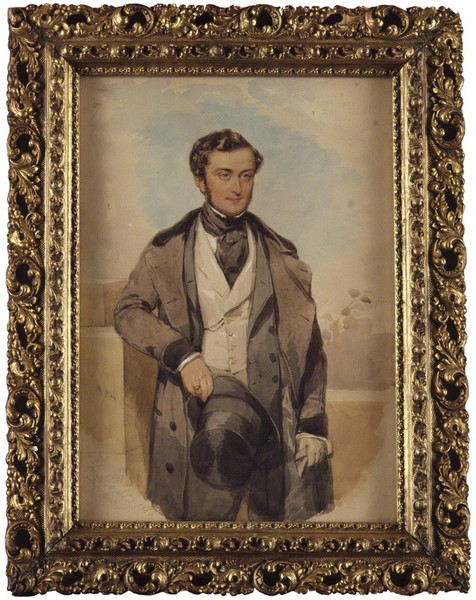 Most celebrated, and often ridiculed, in the Victorian era for his Proverbial Philosophy, Martin Farquhar Tupper (1810-1889) was one of the most popular poets of the nineteenth century. His poem “The Stammerer’s Complaint” (1838) is one of the nineteenth century’s most provocative first-hand accounts of the mysterious condition of stuttering. A life-long stutterer, Tupper introduces a poetics of the stutterer’s melancholic disposition. The poem appeared in an era that had increasingly turned its attention to the causes and cures of a condition that still confounds doctors, therapists, and researchers today.

“The Stammerer’s Complaint” reflects the sense that medical and elocutionary experts of the period had of the melancholia of the person who stutters. Composed of precise iambic pentameter lines, Tupper’s poem is essentially a fantasy of fluent speech from the lyric voice of a poet who laments being excluded from even the most basic privileges of communication granted to fluent speakers. The fantasy reaches a climax as Tupper’s speaker (presumably Tupper himself) imagines the self-annihilation that would result when “wordy captious fools” (l. 31), now become “godless” (l. 82), were to be forced to feel the misery, isolation, and loneliness that is the stammerer’s lot in life. Throughout the nineteenth century, representations of stuttering were fraught with stereotypes, misconceptions, and jokes at the expense of people who stutter. Even those, such as Wright in his The Stutterer's Friend (1843), who promoted the rights of people who stutter against the promotion of dangerous surgical “cures” in the early 1840s, admitted that stuttering is a woefully debilitating disorder that completely bars people who stutter from even the most tolerant and inclusive of conversations. Tupper’s poem demonstrates the longing for fluent speech that was rampant throughout the nineteenth century, a period that promoted a seemingly endless number of systems of cure for disfluent speech, many of which resulted in a further spiraling of melancholia for people who stutter as they sought the privileges of “normal” speech.

Ah! think it not a light calamity
To be denied free converse with my kind,
To be debarred from man’s true attribute,
The proper glorious privilege of Speech.
Hast ever seen an eagle chain’d to earth?
A restless panther in his cage immured?
A swift trout by the wily fisher checked?
A wild bird hopeless strain its broken wing?
Hast ever felt, at the dark dead of night,
Some undefined and horrid incubus
Press down the very soul, — and paralyse
The limbs in their imaginary flight
From shadowy terrors in unhallowed sleep?
Hast ever known the sudden icy chill
Of dreary disappointment, as it dashes
The sweet cup of anticipated bliss
From the parched lips of long-enduring hope?

Then thou canst picture, — aye, in sober truth,
In real, unexaggerated truth, —
The constant, galling, festering chain that binds
Captive my mute interpreter of thought;
The seal of lead enstamp’d upon my lips,
The load of iron on my labouring chest,
The mocking demon that at every step
Haunts me, — and spurs me on—to burst with silence!
Oh! tis a sore affliction to restrain,
From mere necessity, the glowing thought;
To feel the fluent cataract of speech
Check’d by some wintry spell, and frozen up,
Just as it leapeth from the precipice!
To be the butt of wordy captious fools,
And see the sneering self-complacent smile
Of victory on their lips, when I might prove,
(But for some little word I dare not utter,)
That innate truth is not a specious lie:
To hear foul slander blast an honour’d name,
Yet breathe no fact to drive the fiend away:
To mark neglected virtue in the dust,
Yet have no word to pity or console:

To feel just indignation swell my breast,
Yet know the fountain of my wrath is sealed:
To see my fellow-mortals hurrying on
Down the steep cliff of crime, down to perdition,
Yet have no voice to warn, — no voice to win!
‘Tis to be mortified in every point,
Baffled at every turn of life, for want
Of that most common privilege of man,
The merest drag of gorged society,
Words, — windy words.

And is it not in truth,
A poison’d sting in every social joy,
A thorn that rankles in the writhing flesh,
A drop of gall in each domestic sweet,
An irritating petty misery,
That I can never look on one I love,
And speak the fullness of my burning thoughts?
That I can never with unmingled joy
Meet a long-loved and long-expected friend,
Because I feel, but cannot vent my feelings, —
Because I know I ought,—but must not speak,
Because I mark his quick impatient eye
Striving in kindness to anticipate
The word of welcome, strangled in its birth!
Is it not sorrow, while I truly love
Sweet social converse, to be forced to shun
The happy circle, from a nervous sense,
An agonizing poignant consciousness
That I must stand aloof, nor mingle with
The wise and good, in rational argument,
The young in brilliant quickness of reply,
Friendship's ingenuous interchange of mind,
Affection’s open-hearted sympathies,
But feel myself an isolated being,
A very wilderness of widow’d thought!

Aye, ‘tis a bitter thing, — and not less bitter
Because it is not reckoned in the ills,
“The thousand natural shocks that flesh is heir to;”
Yet the full ocean is but countless drops,
And misery is an aggregate of tears,
And life, replete with small annoyances,
Is but one long protracted scene of sorrow.

I scarce would wonder, if a godless man,
(I name not him whose hope is heavenward,)
A man, whom lying vanities hath scath’d
And harden’d from all fear, — if such an one
By this tyrannical Argus goaded on
Were to be wearied of his very life,
And daily, hourly foiled in social converse,
By the slow simmering of disappointment
Become a sour’d and apathetic being,
Were to feel rapture at the approach of death,
And long for his dark hope, — annihilation.

Tupper, Martin.  “The Stammerer’s Complaint.” Geraldine, A Sequel to Coleridge’s Christabel: with Other Poems (London: Rickerby, 1838). 119-23. Print. The poem can also be accessed here: http://archive.org/stream/geraldineaseque01colegoog#page/n5/mode/2up