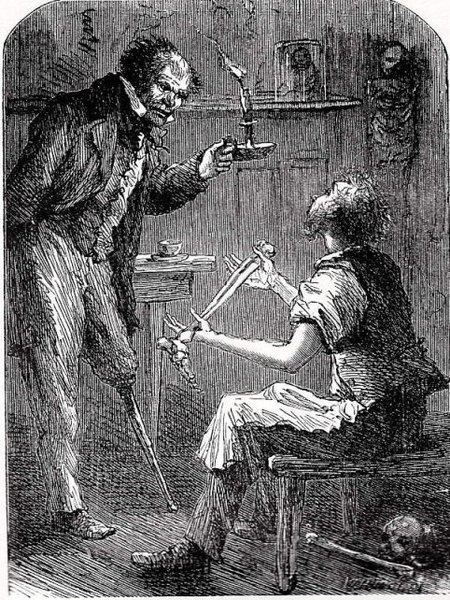 Our Mutual Friend, first published in serial form from 1864–1865, is a novel that literalises George Henry Lewes’s observation that Charles Dickens’s characters are wooden puppets that are brought to life by incident (“Realism and the Art of the Novel” 98): the author uses Silas Wegg, a man who is both a peg leg user and depicted as wooden in appearance, character and action, to explore the greed-provoking influence of material culture. While it is not entirely surprising that Dickens presents Wegg as villainous, since he is physically marked as different by his disability, as Adrienne E. Gavin has suggested, the inclusion of a peg leg corresponds with an apparent obsession that the author had with lower limb prosthesis. In addition to Our Mutual Friend, wooden legs also appear in The Pickwick Papers(1838), The Old Curiosity Shop (1840–41), Barnaby Rudge(1841), Martin Chuzzlewit (1843–44) and David Copperfield (1849–50). A number of prosthesis wielding characters also appear in Household Words, a weekly magazine established and edited by the author, which ran from 27 March 1850 to 28 May 1859. These include the wooden-legged Dust scavenger Peg Dotting from “Dust; Or Ugliness Redeemed” (13 July 1850), the wooden-legged man described in an article published on New Year’s Day in 1859 (“New Year’s Day”) and the respectable amputee milliner’s daughter Mary Wigley from Sarah Smith’s short story “The Lucky Leg” (19 March 1859) to mention but a few. What each of these examples demonstrates is not only that Dickens was familiar with cultural and fictional representations of lower-limb amputees but that he was in fact preoccupied with issues relating to prosthesis use.

Wegg’s use of a rudimentary peg leg can be read as symptomatic of his class status early on in the novel. Peg legs were in fact the cheapest and most basic devices available to amputees. Having been in circulation for several centuries, these devices consisted, in the commonest instances, of a hollow wooden bucket or cup (into which the stump would fit) fixed to a wooden peg that would reach the ground (in the place of a foot). For slightly more money, other adaptations could also be made to better fit the amputee’s stump: a leather sheath could be attached for improved comfort or a knee joint could be incorporated so that the peg could be bent whilst sitting-down. Despite these possible modifications, however, the peg leg was considered to be a low-end product. Since these devices were most commonly used by the working class and street beggars, they therefore became synonymous with low status and small income. Wegg’s occupation at the novel’s outset, then, as the owner of a street stall that sells ballads, fruit and other miscellanies, is intimately tied to his prosthesis use: as we learn, he is unable to secure regular employment with a nearby house, probably because of the limited physical capacities that were associated with limb-loss and prosthesis use.

Like many disabled characters and prosthesis users depicted in nineteenth-century literature, Wegg is associated with a number of negative traits. What is particularly interesting in this instance though, and which can be considered a trope of Dickens’s fiction more widely, is the peculiar linkage between personal object and character that is displayed by Wegg. Specifically, in this instance, the peg leg user is portrayed as wooden (just like his leg) in nearly every respect imaginable. Examples elsewhere in Dickens’s oeuvre of characters that display characteristics that reflect the material properties of a particular object with which they are intimately associated, include Miss Murdstone from David Copperfield, who carries around a “hard steel purse”; as David recalls, “I had never, at that time, seen such a metallic lady altogether as Miss Murdstone was” (Chapter 3). In a similar way to how prosthesis-wearing characters depicted elsewhere were said to reflect, in character, the material properties of their devices—for instance in the case of Miss Ruff in Anthony Trollope’s The Bertrams, who is as cold, hard and fixed in her mannerisms as her glass eye is in material—here Wegg’s prosthesis reflects him as much as he does it. Unlike “the Oaken Lady” of Nathaniel Hawthorne’s short story “Drowne’s Wooden Image” (1844)—a wooden figure head for a boat that is so mesmerisingly mimetic an effigy that “she” is thought to have come to life when “her” original comes to town—, the aesthetic effect of Wegg’s wooden artificial part is not only blatant, but ­­­all-consuming; as we will see in the following passage, in appearance he is more wooden than the oak figure skilfully carved by the craftsman Drowne in Hawthorne’s tale.

Assuredly, this stall of Silas Wegg's was the hardest little stall of all the sterile little stalls in London.  It gave you the face-ache to look at his apples, the stomach-ache to look at his oranges, the tooth-ache to look at his nuts.[1]  Of the latter commodity he had always a grim little heap, on which lay a little wooden measure which had no discernible inside, and was considered to represent the penn'orth appointed by Magna Charta.[2]  Whether from too much east wind or no—it was an easterly corner--the stall, the stock, and the keeper, were all as dry as the Desert.  Wegg was a knotty man, and a close-grained, with a face carved out of very hard material, that had just as much play of expression as a watchman's rattle.  When he laughed, certain jerks occurred in it, and the rattle sprung.  Sooth to say, he was so wooden a man that he seemed to have taken his wooden leg naturally, and rather suggested to the fanciful observer, that he might be expected—if his development received no untimely check—to be completely set up with a pair of wooden legs in about six months.

[Mr. Boffin approaches Wegg’s stall and opens conversation with him.]

“Now, Wegg,” said Mr Boffin, hugging his stick closer, “I want to make a sort of offer to you.  Do you remember when you first see me?”

The wooden Wegg looked at him with a meditative eye, and also with a softened air as descrying possibility of profit.[4]  'Let me think. I ain't quite sure, and yet I generally take a powerful sight of notice, too.  Was it on a Monday morning, when the butcher-boy had been to our house for orders, and bought a ballad of me, which, being unacquainted with the tune, I run it over to him?'

“Right, Wegg, right!  But he bought more than one.”

[Boffin admits to eavesdropping on Wegg’s ballad singing to the butcher.]

“Why, you know every one of these songs by name and by tune, and if you want to read or to sing any one on 'em off straight, you've only to whip on your spectacles and do it!” cried Mr Boffin. “I see you at it!”

“Well, sir,” returned Mr Wegg, with a conscious inclination of the head; “we'll say literary, then.”

“Why, truly, sir,” Mr Wegg admitted, with modesty; “I believe you couldn't show me the piece of English print, that I wouldn't be equal to collaring and throwing.”[5]

[1] While even Wegg’s fruit displays characteristics akin to a wooden leg, this passage could also be read in context with genuine contemporary concerns regarding the adulteration of food. See Anthony S. Wohl’s “Adulteration and Contamination of Food in Victorian England” on The Victorian Web.

[2] Wegg’s measurements are also woodenly rigid, and are even administered by a wooden measuring device. A “penn’orth” is a penny’s worth. For more on Victorian currency, see Marje Bloy’s “British Currency before 1971” on The Victorian Web.

[3] While Wegg is seemingly unaware of his name’s origin, to the reader it is really quite obvious: Wegg is an elision of “wooden” and “leg”.

[4] The crippled beggar was a common trope in Victorian literary and non-fiction texts. Here, Wegg sneakily alters his tone as soon as the possibility of accruing profit arises thus associating him with the often-deployed motif. As Martha Stoddard Holmes identifies, whereas “The victimized afflicted child is a figure of pure intensity and authentic pathos; the villainous begging impostor, in contrast, evokes the emotional clarity of rage, but also ambivalence of suspicion, or the conviction that pathos or ‘emotional excess’ is fakery, a coin that disabled people use to trick the nondisabled into inappropriate giving” (Fictions of Affliction 8). While Wegg does not explicitly use his afflicted state to evoke sympathy, his money-grabbing mannerisms and deceptive strategies associate him firmly with nineteenth-century cripple stereotypes.

[5] As we learn later in the novel (to comical effect), Wegg really is no literary man at all. While orating to Boffin, he stumbles over sentences, mispronounces a number of words and surreptitiously avoids answering any questions. His lumbering, clumsy reading style could perhaps be described as . . . wooden!