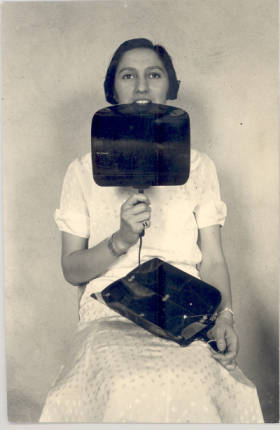 This black and white photograph shows a young woman holding Rhodes’ Audiphone to her mouth, c.1926. Courtesy of The Central Institute for the Deaf-Max A. Goldstein Historic Devices for Hearing Collection.  Becker Medical Library, Washington University School of Medicine.

On September 1879, Richard Silas Rhodes (1842-1902), president of a publishing company in Chicago, received a patent for his “Audiphone for the Deaf” his various improvements to the device. (U.S. Patent No. 319,828). Rhodes had conductive hearing loss[1] for twenty years following a bout of illness and was frustrated with his continuous failed encounters with ear trumpets. He observed he could hear the ticking of his watch when he held it in his mouth, and this inspired his construction of the Audiphone, which exploited the fact sound waves can be transmitted through the teeth or cranial bones.

Hearing through bone conduction by using a material to transmit external sound through the jaw or teeth is an ancient notion, with references to its use dating back to the Ancient Greeks. In the seventeenth and eighteenth centuries, some scholars observed sounds could be heard at a distance upon placing a rod on the ground and holding the other end to the teeth. Physicians, educators, and even deaf individuals experimented with a variety of materials, such as wood, to figure out which objects best could transmit sound from a vibrating source (Mills 143; Goldstein 345).

The Audiphone was made of a flexible sheet of polished black vulcanite (hardened rubber), with a handle, and was constructed in the shape of a fan. It was 24cm wide 27.7cm long, and 1mm thick. Another model was later constructed consisting of two leaves, designed so the user could also hear his or her voice. The standard model sold for $10 and the double-model sold for $15, an expensive sum at the time. For an extra charge, Rhodes would add ornamental features to disguise the instrument and make it inconspicuous as a hearing aid device. It was designed to be held loosely in the hand, with the upper edge placed under the upper teeth with slight pressure; the lower teeth should not be allowed to come into contact with the instrument (Goldstein 347). The device was effective only in conductive hearing loss. Users could improve their hearing up to 30 decibels, equivalent to a soft conversation heard a few feet away in a quiet room (for comparison, 20dB is the rustling of leaves, or whispering; 0dB is the hearing threshold). In January 1881, Rhodes received a patent for a modified version of his design, an Audiphone that folded as a fan of 10mm. The model was awarded a medal at the 1893 World’s Columbia Exposition in Chicago.

In an advertising pamphlet, The Audiphone: A New Invention that enables the deaf to hear (1879), Rhodes remarks the Audiphone was “GOOD NEWS FOR THE DEAF,” for it enables them to hear ordinary conversation readily and was beneficial for church, lectures, concerts, plays, and so forth. Moreover, the design of the device as a fan meant the user could easily conceal their deafness if they wished, by pretending they were simply using a fan. Numerous testimonials from the United States and Europe commented on the Audiphone’s acoustic capabilities. The Englishman James Samuelson, for instance, purchased one in his visit to the United States in 1880, and tried it himself both in private and in public. He testifies: “It seems to me that aurists [medical specialists of the ear] and teachers of the deaf will be very much benefited by the invention: the former, through being able to use it as an instrument for diagnosis…the latter, where the child is deaf from some injury or imperfection of the mechanical portions of the auditory apparatus” (Samuelson 12). Indeed, the Audiphone was used in schools for the deaf, particularly in France, though opinions on its benefits varied. Some teachers were astounded at its ability to assist deaf children to speak, while others noted it was completely unnecessary as a pedagogical aid. Mary McCowen, for instance, who taught a class of semi-deaf children at the Nebraska School for the Deaf (est. 1869), and at the “Voice and Hearing School for the Deaf” in Chicago, remarked:

“Though I began the year’s work as a most enthusiastic advocate of the audiphones, and used it conscientiously for several months, I cannot without a protest allow it to be said that the teacher of that class ascribes the success to the audiphones. I make a specialty in my work here of training the hearing, but I have thus far failed to find a single child that was really and truly helped by the audiphones” (American Annals of the Deaf and Dumb 87).

Some schools in England even reported that at least twenty percent of the pupils had sufficient hearing when assisted with the audiphone, enabling them to participate more diligently in their speech-training and learning.

Rhodes’ Audiphone remained a popular bone-conduction hearing instrument until the early years of the twentieth century, long after Rhodes’ unfortunate death—he was killed while walking along the Wisconsin Central Railroad tracks in Illinois (Berger 318). Various other patents and designs of the Audiphone popped up over the ears, each boasting a more efficient conduction system, a cheaper price tag, or a more revolutionary design. Some of these were quickly dismissed as nothing more than another “quack cure” for deafness.

[1] Conductive hearing loss is when it is difficult for sound waves to conduct through the tympanum (the ear drum) or the middle ear, where the ossicles (three tiny bones in the ear) reside.

It is remarkable how rapidly they learn to distinguish words by sound. In a very short time, they have learned to repeat whole sentences spoken to them while blindfolded. It is believed that every mute child may hear and learn to speak by using the Audiphone.

It must be borne in mind, however, that a mute who has never heard has no conception of the meaning of the simplest words. Even though he be very intelligent and highly educated, read and write fluently, and interpret language readily by the motion of the speaker's lips, still he will not understand the most elementary sound until he is taught. He is familiar with visible, but knows nothing of articulate, language. At first, if you ask him to intimate whether or not he hears by means of the Audiphone, he may indicate that he feels a peculiar sensation that is new to him. It will not be long, however, until he realizes that what seemed to him feeling we call sound. Parents and teachers of mutes are, therefore, recommended to begin with the rudiments of language, as in teaching a child of two years.

Mutes enjoy music from the first. A piano or organ should be used daily in their early training, at first resting the handle of the Audiphone on the instrument. Start and stop the music at intervals, until they realize the difference. Then they may withdraw from the piano and gradually accustom themselves to the new sensation.

Faithful and patient practice, repeating over and over again the vowels and other simple sounds day after day, must be the ground-work of the mute's articulate education. To expect him to understand the first sounds that reach his brain is like asking the child in the A B C class to read Bacon or Shakspeare [sic].