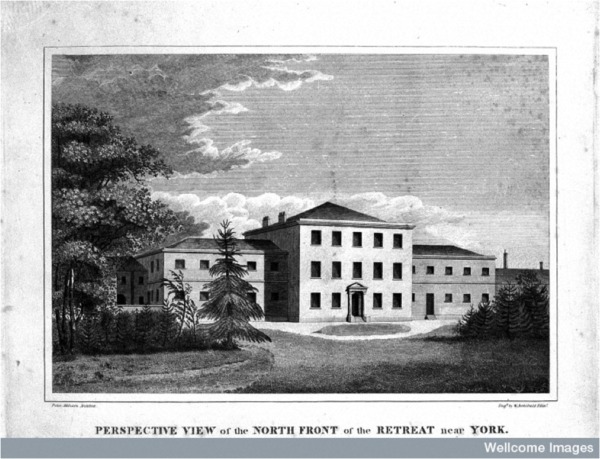 Frontispiece from A Description of the Retreat, an Institution Near York, for Insane Persons of the Society of Friends (1813). Courtesy of Wellcome Images under a Creative Commons License.

In 1791 a female patient, belonging to the Society of Friends, was admitted to the York Asylum. Since her family did not live nearby, they requested that their friends who lived in the city visit her. These visits were refused, and a few weeks later the patient later died in mysterious circumstances. The Quaker community were appalled and decided to found a charitable asylum which opened in 1796 under the direction of William Tuke, based on the more human principle of moral management, without the use of physical restraints. The publication in 1813 of a description of the retreat by Samuel Tuke, the grandson of the institution’s founder, quickly drew the public’s attention the plight of the insane, exposing the routine and systematic maltreatment of those incarcerated at madhouses such as the York Asylum and London’s notorious Bethlem Hospital. The description was of vital importance, leading to the establishment of a select committee in Parliament to regulate asylums in 1815. The resulting legislation, the Lunacy Acts of 1845, outlawed practices such as allowing paying members of the public to view patients, established the Lunacy Commission to inspect asylums, and required the establishment of a public asylum in every county. Tuke’s description also marked a turning point in the history of the treatment of the insane, increasing support for the moral management on which the new nineteenth-century medical discipline of psychology was largely based.

The following extract emphasises the familial homeliness of the Retreat’s environment, in contrast to the prison-like conditions of previous institutions, and the use of middle-class domestic rituals, such as tea parties, to promote conformation to societal norms of gendered behaviour. Patients’ return to reason and sanity was determined to a considerable extent by their adherence to conventions like good manners, with those who did not match expectations being treated ‘like ill-disciplined children.’[1] Despite the policy of non-restraint,[2] Tuke acknowledges the deliberate establishment of fear of punishment in patients’ minds. This may be seen as one of the main roots of Michel Foucault’s contention that ‘the absence of constraint in the nineteenth-century asylum is not unreason liberated, but madness long since mastered.’[3] According to this influential critique of the asylum system, patients, like prisoners, no longer needed such high levels of restraint or supervision since this had been replaced by a more sinister method of control: the internalisation of restraint which amounted to  the self-policing of individuals’ behaviour.

[1] Porter, Roy. The Greatest Benefit to Mankind: A Medical History of Humanity from Antiquity to the Present. London: HarperCollins, 1997. Page 497.

[2] In practice, attendants at the asylums sometimes resorted to the use of strong clothing and straitjackets to restrict patients’ movement and prevent them from ripping their clothing. In the rare cases of violent mania, patients were kept in a darkened room in solitary confinement until they became calmer. In the meantime, they could move around the room or lie in bed as they chose. Similarly rare were instances of force feeding when there was a high risk of starvation, and of strapping patients to their beds if they seemed likely to attempt suicide during the night. Tuke repeatedly stresses that such episodes were regrettable but sadly necessary in the most extreme cases. The use of chains, however, was strictly prohibited.

[3] Foucault, Michel. Madness and Civilization: A History of Insanity in the Age of Reason. Translated from the French by Richard Howard. London and New York: Routledge, 2009. Page 239.

The female patients in the Retreat, are employed, as much as possible, in sewing, knitting, or domestic affairs; and several of the convalescents assist the attendants. Of all the modes by which the patients may be induced to restrain themselves, regular employment is perhaps the most efficacious; and those kinds of employment are doubtless to be preferred, both on a moral and physical account, which are accompanied by considerable bodily action; that are most agreeable to the patient, and which are most opposite to the illusions of his disease.

In an early part of this chapter, it is stated, that the patients are considered capable of rational and honourable inducement; and though we allowed fear a considerable place in the production of that restraint, which the patient generally exerts on his entrance into a new situation; yet the desire of esteem is considered, at the Retreat, as operating, in general, still more powerfully. This principle in the human mind, which doubtless influences, in a great degree, though often secretly, our general manners; and which with peculiar force on our introduction into a new circle of acquaintance, is found to have great influence, even over the conduct of the insane. Though it has obviously not been sufficiently powerful, to enable them entirely to resist the strong irregular tendencies of their disease; yet when properly cultivated, it leads many to struggle to conceal and overcome their deviations, within such bounds, as do not make them obnoxious to the family.

This struggle is highly beneficial to the patient, by strengthening his mind, and conducing to a salutary habit of self-restraint; an object which experience points out as of the greatest importance, in the cure of insanity, by moral means.

That fear is not the only motive, which operates in producing self-restraint in the minds of maniacs, is evident from its being often exercised in the presence of strangers, who are merely passing through the house; and which, I presume, can only be accounted for, from that desire of esteem, which has been stated to be a powerful motive to conduct.

It is probably from encouraging the action of this principle, that so much advantage has been found in this Institution, from treating the patient as much in the manner of a rational being, as the state of his mind will possibly allow. The superintendent is particularly attentive to this point, in his conversation with the patients. He introduces such topics as he knows will most interest them to display their knowledge to the greatest advantage. If the patient is an agriculturist, he asks him questions relative to his art; and frequently consults him upon any occasion in which his knowledge may be useful. I have heard one of the worst patients in the house, who, previously to his indisposition, had been a considerable grazier, give very sensible directions for the treatment of a diseased cow.

These considerations are undoubtedly very material, as they regard the comfort of insane persons; but they are of far greater importance, as they relate to the cure of the disorder. The patient feeling himself of some consequence, is induced to support it by the exertion of his reason, and by restraining those dispositions, which, if indulged, would lessen the respectful treatment he receives; or lower his character in the eyes of his companions and attendants […]

To consider them at the same time both as brothers, and as mere automata; to applaud all they do right; and pity, without censuring, whatever they do wrong, requires such a habit philosophical reflection, and Christian charity, as is certainly difficult to attain […]

In considering our first division of this subject, viz. the modes by which self-restraint may be induced, we have anticipated many of the means by which the comfort of this unhappy class of our fellow beings is promoted; indeed we might, without impropriety, have included all these means under our former division; since whatever tends to promote the happiness of the patient, is found to increase his desire to restrain himself, by exciting the wish not to forfeit his enjoyments; and lessening the irritation of mind, which too frequently accompanies mental derangement.

The comfort of the patients is therefore considered of the highest importance, in a curative point of view. The study of the superintendents to promote it with all the assiduity of parental, but judicious attention, has been, in numerous instances, rewarded by an almost filial attachment. In their conversation with the patients, they adapt themselves to their particular weaknesses; but, at the same time, endeavour to draw them insensibly from the sorrow, or the error, which marks the disease.

The female superintendent, who possesses an uncommon share of benevolent activity, and who has the chief management of the female patients, as well as of the domestic department, occasionally gives a general invitation to the patients, to a tea-party. All who attend, dress in their best clothes, and vie with each other in politeness and propriety. The best fare in provided, and the visitors are treated with the attention of strangers. The evening generally passes in the greatest harmony and enjoyment. It rarely happens that any unpleasant circumstance occurs; the patients control, in a wonderful degree, their different propensities; and the scene is at once curious, and affectingly gratifying.

Some of the patients occasionally pay visits to friends in the city; and female visiters [sic.] are appointed every month, by the Committee, to pay visits to those of their own sex; to converse with them, and so propose to the superintendents, or the Committee, any improvements which may occur to them. The visiters sometimes take tea with the patients, who are much gratified with the attention of their friends, and most behave with propriety.

It will be necessary here to mention, that the visits of former intimate friends, have frequently been attended with disadvantage to the patients; except when convalescence had so far advanced, as so afford a prospect of a speedy return to the bosom of society. It is, however, very certain, that as soon as reason begins to return, the conversation of judicious, indifferent persons, greatly increases the comfort; and is considered almost essential to the recovery of many patients. On this account, the convalescents of every class, are frequently introduced into the society of the rational parts of the family. They are also permitted to sit up till the usual time for the family to retire to rest, and are allowed as much liberty as their state of mind will admit.