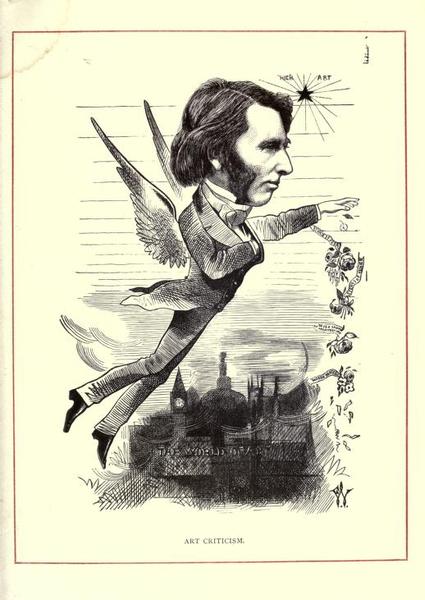 This image depicts a winged Ruskin flying over London, under the guiding star of “High Art,” sprinkling roses beribboned with the titles of his art criticism. Image Courtesy The Public Domain Review under a Creative Commons License.

As theories of degeneracy[1] gained currency in the latter part of the nineteenth century, literary critics increasingly used rhetoric of pathology (that is, of health and sickness) to discuss authors and their works.[2] As Arata explains, critics interpreted literature deemed “degenerate” (for unsavoury topic matter, for example) as “symptom and sign of its author’s pathology” with the potential to operate as “an instrument of contagion” to its readers (“Strange Cases” 173). As apparent in the works of not just art and literary critics, but also that of psychiatrists, political theorists, scientists, and sociologists, Victorian thought interwove literature and morality with the body, often implying that the disabled or ill body manifested moral disorder.

The passage below from the first instalment of “Fiction, Fair and Foul,” John Ruskin’s series of literary criticism published in The Nineteenth-Century, strikingly illustrates this rhetoric. In this piece, Ruskin complains about the Victorian fascination with the “analysis of physical corruption,” which he argues has become “the most valued material of modern fiction, and the most eagerly discussed texts of modern philosophy” (943). Ruskin believed that Victorian fiction was preoccupied with depicting scenes of death and characters with illness and disability, and that this preoccupation was caused by increased urbanization and industrialization.  In the section below, the bulk of which is a footnote to a section referring to this fiction as a “cretinous school,” Ruskin argues that disabled characters are the product of the authors’s brain disease.

[1] The theory that certain groups of people, or even society in general, were biologically, psychologically, and socially degenerating or regressing into a less civilized state.

[2] Barbara Spackman shows how this trend continued well into the twentieth century, as well, and traces the “genealogy” of the rhetoric of sickness in her book Decadent Genealogies.

[T]he effectual head of the whole cretinous school [of fiction with characters with disability] is the renowned novel in which the hunchbacked lover watches the execution of his mistress from the tower of Notre-Dame;[1] and its strength passes gradually away into the anatomical preparations, for the general market, of novels like Poor Miss Finch,[2] in which the heroine is blind, the hero epileptic, and the obnoxious brother is found dead with his hands dropped off, in the Arctic regions.*

* The reader who cares to seek it may easily find medical evidence of the physical effects of certain states of brain disease in producing especially images of truncated and Hermes-like deformity[3], complicated with grossness. …  In its grotesque and distorting power, it produced all the figures of the Lay Goblin,[4] Pacolet,[5] Flibbertigibbet,[6] Cockledemoy,[7] Geoffrey Hudson,[8] Fenella,[9] and Nectabanus[10]; in Dickens it in like manner gives Quilp,[11] Krook,[12] Smike,[13] Smallweed,[14] Miss Mowcher,[15] and the dwarfs and wax-work of Nell's caravan[16]; and runs entirely wild in Barnaby Rudge[17], where, with a corps de drame composed of one idiot, two madmen, a gentleman fool who is also a villain, a shop-boy fool who is also a blackguard, a hangman, a shrivelled virago, and a doll in ribands—carrying this company through riot and fire, till he hangs the hangman, one of the madmen, his mother, and the idiot, runs the gentleman fool through in a bloody duel, and burns and crushes the shop-boy fool into shapelessness, he cannot yet be content without shooting the spare lover's leg off, and marrying him to the doll in a wooden one; the shapeless shop-boy being finally also married in two wooden ones. It is this mutilation, observe, which is the very sign manual of the plague; joined, in the artistic forms of it, with a love of thorniness… . The two frescoes in the colossal handbills which have lately decorated the streets of London (the baboon with the mirror,[18] and the Maskelyne and Cooke decapitation[19]) are the final English forms of Raphael's arabesque [20]under this influence... .

[I]t is always to be remembered that the evil and good are alike conditions of literal vision: and therefore also, inseparably connected with the state of the health. I believe the first elements of all Scott’s errors were in the milk of his consumptive nurse, which all but killed him as an infant … and was without doubt the cause of the teething fever that ended in his lameness.

[2] Wilkie Collins’s Poor Miss Finch (1872). Ruskin misinterprets the death of the “obnoxious brother”: his hands did not “drop off” his body in the Arctic regions, but rather they dropped—while remaining attached to his arms—to his lap as he died.

[3] Hermes, the Ancient Greek messenger god and guide to the underworld, has no direct relation to deformity (unless in his offspring, Pan, the Panes, and the Satyri, who all had the legs and feet of goats). Ruskin refers here to Hermes’s role as a god of boundaries and to the boundary-marking "herm" statues, whose bodies were shapeless pillars with a carved head on top and an erect phallus halfway down.

[4] A page or errand boy from Sir Walter Scott’s The Lay of the Last Minstrel.

[7] A “goblin” and “fool” from Sir Walter Scott’s The Doom of Dervorgoil.

[8] A knighted “dwarf” from Sir Walter Scott’s Perevil of the Peak.

[9] A character, from Sir Walter Scott’s Perevil of the Peak, who pretends to be deaf and mute to spy on her employer.

[10] A “dwarf” from Sir Walter Scott’s Tales of the Crusador.

[11] A little person and villain from Charles Dickens’s The Old Curiosity Shop (1841).

[14] An elderly loan shark who is also hearing impaired and paralyzed from Charles Dickens’s Bleak House (1853).

[18] Possibly an advertisement for Brook’s Monkey Soap, which commonly featured a monkey dressed as a man and carrying a mirror or a reflective pan.

[19] An advertisement for magicians John Neville Maskelyne and George Alfred Cooke in which a man holds a decapitated head over the still-living beheaded body.