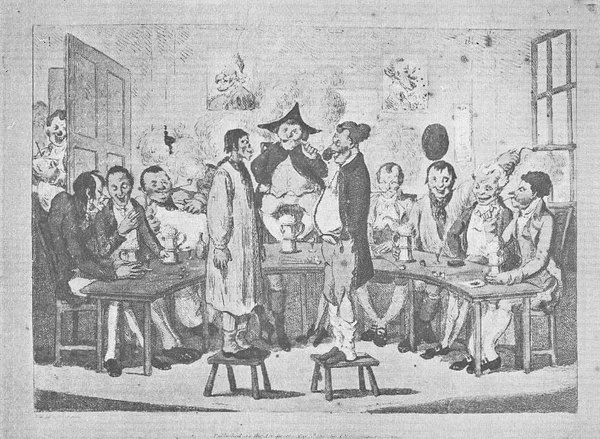 Ugly Clubs reflect changing notions of deformity through the long nineteenth century, before and beyond. Ugly Clubs arose from fictional forebears in early eighteenth-century satirical periodicals in Britain, including Ned Ward’s The Secret History of Clubs and Joseph Addison’s and Richard Steele’s Spectator papers.[1] The factual club in Liverpool, England (1743-54) reflected a number of social, political, and moral debates as it communally satirized deformity and, by extension, disability. In an era when Samuel Johnson interchangeably defined “deformity” and “ugliness” in his ground-breaking A Dictionary of the English Language, and contemporary with the artist William Hogarth’s The Analysis of Beauty, the Ugly Face Club paralleled debates about physiognomy, artistic caricature, and minority dissent toward the club’s focus on ugliness—which “doubles the Ridicule,” according to William Hay, a member of Parliament who was hunchbacked and who wrote Deformity: An Essay (1754), in which he vowed never to be a member of an Ugly Club.[2]

Like other Clubs that permeated eighteenth-century British social culture, the Ugly Face Club was a voluntary fraternal organization whose activities revolved around meeting in a coffee house, drinking ale, and singing songs. Liverpool’s “Most Honourable and Facetious Society of Ugly Faces” consisted of bachelors who banded together to satirize their “odd,” “remarkable,” and “out of the way” facial deformities, not construed as disabling. One membership rule stated that even if a candidate is “humpback’d and leg’d and posses’d of all the perfections besides of the great and immortall worthy Aesop,” he could not be admitted to the Club if he lacked the requisite facial deformities, ranging from “Blubber lips, little goggyling or squinting Eyes” to “a large Carbuncle Potatoe Nose.”[3] Members were drawn mainly from Liverpool’s merchant class, also including doctors, ship captains, tradesmen, and the architect of the city’s Town Hall.

Throughout the nineteenth century, Ugly Clubs continued to spread, with variations immigrating to America and populating colleges (including the Universities of Virginia and North Carolina), also published in periodical literatures. Perhaps more than their English forebears, Ugly Clubs at American colleges were social fraternities. Framed by the Civil War (1861-65), these satiric portraits appeared against more sobering and realistic contrasts of deformed bodies. UVA’s rituals quieted during the war, when many Americans suffered disabling, rather than amusing, deformities. The heroism or horror of war likely fit uneasily with self-ridicule and fraternal pranks, and the overriding realism and rise of naturalism likely dampened the Club’s antics. In the 1860s, European writers like George Augustus Sala and Victor Hugo mentioned Ugly Clubs, but beyond that, Ugly Clubs seemed to retreat.[4] In the United States, so-called “Ugly Laws” (circa 1880s-1970s) attempted to prohibit individuals with physical deformities from visiting public spaces, perpetuating historic conflations of disability with ugliness.[5] A different lineage of Ugly Clubs arose in Piobicco, Italy, which to this day celebrates a Festival of the Ugly.[6] Throughout their history, Ugly Clubs were complexly entwined with a culture that demeaned deformity, but their communal affiliation refrained deformity that was otherwise isolating and disparaging. Via their witty self-ridicule and ridiculous rules (not to mention the projected self-respect that went with abiding by them), Ugly Clubs participated in a broader historical interrogation of humanity and disability that persists to this day.

The published volume of archival papers of Liverpool’s Ye Ugly Face Clubb (1912) provides evidence of this transatlantic trend across the eighteenth and nineteenth centuries, including the following excerpt dated 1887. This surviving volume is particularly interesting because it notes how Ugly Clubs made a practice “of destroying all documentary evidence of their natural gifts; for even in this MS. many pages are missing, whether by accident or design is open to conjecture.”[7]

[1] Ned Ward’s account or invention of the “Club of Ugly-Faces” (1709) likely inspired Joseph Addison’s and Richard Steele’s fictional Club of the same name in The Spectator papers (1711-12, 1714), including societies at Oxford and Cambridge Universities.

[2] Samuel Johnson published his first edition of A Dictionary of the English Language in 1755. In The Analysis of Beauty (1753), William Hogarth identified beauty in curved or serpentine lines, which critics disparaged as his “Anti-line of Beauty” and “Line of Deformity.” See also William Hay, Deformity: An Essay, ed. Kathleen James-Cavan (Victoria, BC: English Literary Studies, University of Victoria, 2004).

[4] George Augustus Sala was an English journalist, and Victor Hugo was a French writer whose novels include The Hunchback of Notre-Dame and The Man Who Laughs.

The “Ugly Clubs,” of which particulars are to be met in “Hone’s Every-Day Book,” and like compilations, have a somewhat apocryphal air; but at last documentary evidence of the constitution and history of one of these facetious societies of the last century has been brought to light.[1] It is an old thin volume in manuscript discovered by a Liverpool bookseller. It contains the rules, accounts, and minutes of proceedings of “The Most Honourable Society of Ugly Faces,” who appear to have been in active existence in that city at least from January 1743 to January 1754, and who were possibly the model for other like facetious societies in later days. The primary condition of membership was that the candidate should have “something odd, remarkable, droll, or out of the way in his phiz; as in the length, breadth, or narrowness thereof, or in his complexion, the cast of his eyes or make of his mouth, lips, chin, &c.”[2] Of all this (it is added) the Majority of the Society are to judge, the President to have a casting vote. Extensive lists of names of actual members are duly entered, together with records of meetings, from which it appears that sober subjects were not excluded from their table, since on one occasion the President makes a speech “On the Declaration of War against France.” In this book there also appear minute descriptions of members. James Ashton, D.D., Chaplain to the Society, is stated to have “a fine carv’d face, Eyelashes like two Beesoms, Nose like a shuffle Nos’d Shark, a triangular Mouth, blubber Lips, Meagre Cheecks, and Eyes of a Sea-Green,” and to be “an excellently well qualified member.” Mr. John Woods, of Liverpool, architect, elected July 22, 1751, is sketched in the following flattering terms: “A stone Colour’d complexion, a dimple in his Attick Story, the pilasters of his face fluted, tortoise ey’d, a prominent nose, wild grin, and face altogether resembling a badger, and finer, tho’ smaller, than Sr Chryst. Wren or Inego Jones’s.”[3] As there is an entry in the accounts of a payment “for five pictures of ugly faces” there may be some more convincing record still extant of the claims of these persons to figure at the gatherings at the old “Exchange Coffee House,” which place of entertainment, it seems, was their headquarters. But it has been shrewdly observed that it is not certain whether these were portraits of exceptionally ill-favoured persons, purchased for the general delight and comfort of the club.

[1] “Hone’s Every-Day Book” was a British periodical published by William Hone in Britain in the 1820s and subtitled “A guide to the year: describing the popular amusements, sports, ceremonies, manners, customs, and events, incident to the three hundred and sixty-five days, in past and present times.”

[2] “Phiz” refers to “physiognomy,” or judging a person by their outward appearance. This practice originated in antiquity and regained popularity in the eighteenth century through theorists like Johann Caspar Lavater (who published his Essays on Physiognomy in the 1770s), often with discriminatory ends.

[3] John Woods was the architect of Liverpool’s Town Hall, and Sir Christopher Wren and Inigo Jones were renowned British architects of the seventeenth and eighteenth centuries.