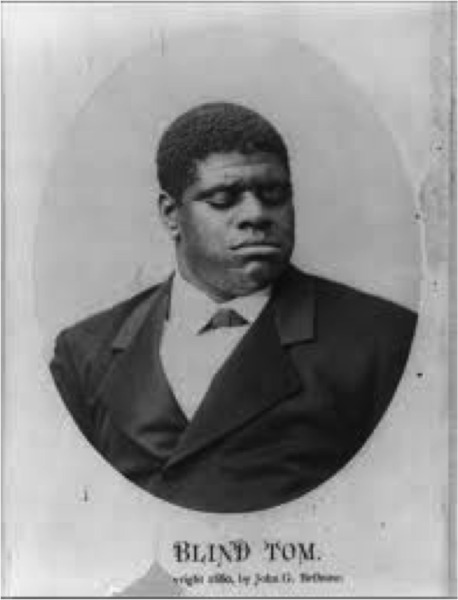 Thomas Greene Wiggins, better known as “Blind Tom,” was an autistic savant with an encyclopedic memory. He is known for his mind-boggling ability to replicate music and other sounds after only one hearing. Wiggins was born into slavery in Columbus, Georgia in 1848. His master, Wiley Jones, was reluctant to care for a blind infant slave and sold Wiggins to his neighbor, General Bethune.

By six Wiggins had found the Bethune piano and managed to replay exactly songs performed by his white master’s family. By eight Wiggins was contracted to a traveling showman named Perry Oliver who promoted him as a “freak.” With Oliver he performed all over the United States and Europe. His extraordinary talent for imitation, music and memory earned him an invitation to play before President James Buchanan at the White House. He was the first African American musician to officially perform in the White House.

Unfortunately, emancipation failed to deliver Wiggins from the shackles of slavery. His enormous fame sullied by the deep-rooted racism of the period. Audiences often confused Wiggins’s autism with “idiocy,” and reinforced the widespread belief that people of African descent were mentally inferior to whites and incapable of caring for themselves. Through “Blind Tom” we learn just how easily misinformation about autism allowed antebellum Americans to continue to conflate race with disability.

Tom was born blind, and, learning nothing from sight, manifested in his early infancy so entire a want of intellect as to induce the belief that he was idiotic as well as blind. His imbecility and helplessness secured for him the sympathy and care of the family in his infancy; when he began to walk and run about the yard, his amusing peculiarities made him a pet. His first manifestation of interest in anything was his fondness for sounds; the first indication of capacity, his power of imitating them. Musical sounds exerted a controlling influence over him; but all sounds, from the soft breathings of the flute to the harsh grating of the corn-sheller, appeared to afford him exquisite enjoyment […]

The first effort to teach him was made one evening when the family was at supper, (Tom, as usual at meals times, being present,) when his owner, upon being informed that his mother, as an excuse for not teaching him something, had said he had not sense enough to learn anything, replied, “That is a mistake. A horse or a dog may be taught almost anything, provided you always use precisely the same terms to express the same idea. Show him what you mean, and have the patience to repeat it often enough. Tom has as much sense as a horse or a dog, and I will show you that he can be taught.” He thereupon arose from the table, and approaching Tom, said to him, “Tom, sit down,” Tom, of course as was expected stood still and repeated the words. He repeated the order and sat him upon the floor. He then said to him, “Tom, get up.” Tom sat still and repeated the order. He then repeated the order and lifted Tom to his feet. He then ordered Tom to sit down, which he did promptly—to get up, and he sprang to his feet […]

He was perfectly delighted by cries of pain. When his mother whipped any of the older children he would laugh and caper, and rub his hands in an ecstasy of enjoyment, and soon would be found whipping himself, and repeating the words of the mother and the cries of the child. He enjoyed so highly the crying of children that he would inflict pain upon them, for the pleasure of hearing them cry; and a constant watch had to be kept on him when he was about younger children. He once choked a younger brother nearly to death, and at another time burnt an infant sister so badly as to produce fears of a fatal result. To this day any exclamation or expression indicative of pain gives him great pleasure; and though he will express sympathy for the suffered, and prescribe remedies for his relief, he cannot restrain his expressions of pleasure. Doubtless it is the strength and the intensity of expression given to sounds produced by pain, that afford the enjoyment. […]

When he was three or four years of age, it was observed that he passed most of his time with his face upturned to the sun, as if gazing intently upon it, occasionally passing his hands back and forth with rapid motion before his eyes; that was soon followed by thrusting his fingers into his eyes with a force which appeared to be almost sufficient to expel the eye-balls from their sockets; from this he proceeded to digging into one of them with sticks, until the blood would run down his face. All this must have been pleasant to him, or he would not have done it; and there is no doubt that he is indebted to the stimulus thus applied to his eyes, for the measure of sight he now enjoys. […]

The mere technicalities of music Tom learns without difficulty. Its substance he seems to comprehend intuitively. To teach him the notes, it was necessary only to sound them, and tell him their names. With the elements and principles of music he seems to be familiar, long before he knew any on the names by which they were indicated […]

Considering that in early life he learned nothing, and later but little from sight, that he is possessed by an overmastering passion, which so pervades his whole nature as to leave little room for interest in anything else, and the gratification of which has been indulged to the largest extent, it is not surprising that, to the outside world, he should exhibit but few manifestations of intellect as applicable to any of the ordinary affairs of life, or that those who see him only under its influence should conclude that his is idiotic.

The Marvelous Musical Prodigy, Blind Tom: The Negro Boy Pianist, Whose Performances at the Great St. James and Egyptian Halls, London, and Salle Hertz, Paris, Have Created Such a Profound Sensation : Anecdotes, Songs, Sketches of the Life, Testimonials of Musicians and Savans, and Opinions of the American and English Press, of "Blind Tom." Sun Book and Job Printing Establishment, 1867.