San Remo as a Winter Residence 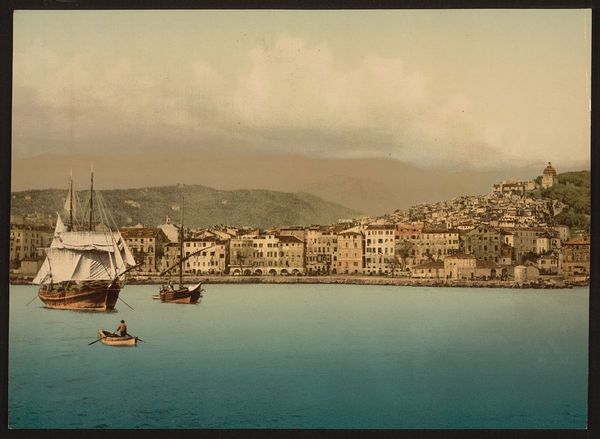 This coloured photo shows the harbour in San Remo; three boats sail on the blue Riviera, with villas and hills in the distance. Photomechanical print, photochrom, colour.  ca. 1890 to 1900.  Courtesy Library of Congress, in the public domain (LC-DIG-ppmsc-05986).

Invalidism may seem to limit mobility, confining one to the four walls of the sickroom. But, for those who were well enough and wealthy enough, the Victorians actually made an industry of travelling for the sake of one’s health. Thus, far from being immobile, an invalid could actually undertake quite a strenuous travel itinerary.  Within England, one could visit a hydropathy establishment, such as Ben Rhydding, in Yorkshire, or a seaside resort town. San Remo was one of many popular Mediterranean locations for invalids hoping to avoid an English winter altogether. The author of the excerpt below, a self-declared invalid, writes a practical guide for Englishmen and women wishing to winter abroad, in sunny San Remo. Aspinall compares San Remo favourably to Madeira (“depressing and debilitating” 2), Egypt (“hot and dusty, and the food little calculated to suit a delicate digestion” 2) Naples, Rome and Sorrento, and Nice as a favoured spot for convalescents.  He gives practical advice on the hotels (with names like Hôtel Victoria and Hôtel d’Angleterre, it is easy to see that hotels were catering to the English abroad), and specific directions for scenic walks and donkey rides in this Victorian version of Lonely Planet for invalids. In Henry James's The Portrait of a Lady (1880), San Remo is one of the tubercular Ralph Touchett's haunts, where he wiles away "a dull, bright winter beneath a slow-moving white umbrella" (242).

San Remo combines, in a modified degree, the invigorating qualities of Nice with the warmth of Mentone, but without its closeness; and is thus peculiarly adapted for diseases of the chest,[1] especially if the digestive organs are impaired.

It lies due south, in the middle of a large bay, at the east end of which the Capo Verde, and at the west the Capo Nero, run far out to sea, and form a sufficient shelter against the winds from both quarters.  Gently sloping hills, covered with orange, lemon, and olive trees, rise from these capes, one above another, in the form of an amphitheatre, extending far back till they join a chain of lofty mountains, the highest of which, Monte Bignone, rising 4300 feet, lies exactly behind the town, and these mountains again are protected by the Maritime Alps.  Begnone and its fellows form one continuous range, there is not a single gap through which the wind can rush; of all the numerous valleys radiating from the town not one leads to a pass, they simply run up between the lower hills till they lose themselves, vanishing in the sides of the mountains.  The lowest elevation at which the range can be crossed is 2000 feet.  Unless people have seen the place they will hardly understand this description, but the truth of it is perceived at once from any of the lower hills, or, better still, by taking a boat about a mile out to sea.  Of course it is a matter of the greatest importance to invalids to step at once out of the house into the lemon and olive groves without risk of exposure to wind and dust;  and this advantage San Remo possesses more than any place I know, as the olive groves reach down almost to the water’s edge, and the delight of wandering amongst them none but those who have tried can know.  Their immense extent also keeps the air cool in the warmer parts of the season by preventing radiation, such as takes place from the bare rocks at Mentone, making it too hot for English residents after the middle of April.

Hitherto I have never stayed at San Remo later than the end of April, but so much has always been said to me by the natives about the salubrity of their climate in May, and they have so often assured me that it was one of their pleasantest months, that this year I was induced to try it, and we therefore remained there instead of going as usual to Germany.  The weather during the whole of April had been most charming, as nearly approaching to perfection as I can imagine.  Bright, beautiful, calm, cool mornings, a delightful sea breeze springing up about ten and continuing till almost half-past five, when it again calmed down, and there was a delightful twilight, cool and refreshing, of nearly two hours.  The nights were also quite cool.  We remained until the twenty-fifth of May, and the same description will apply to the weather during the whole of that month; it was charming, hot, but never so much so as to cause us inconvenience, while the amount of verdure prevented that intolerable glare which is so trying to the eyes in less wooded localities.

The weather is often hotter in England in April and May than we found it at San Remo.[2]  As I shall mention elsewhere, the hotel keepers are going to build houses for the convenience of bathers, hoping to make San Remo the great summer bathing place of the Riviera.  It will, I am convinced, be ere long the great winter sanatorium for diseases of the chest.  Amongst other recommendations, physicians all agree that it is particularly good in cases of haemorrhage, the air is so soothing.

[1] In the nineteenth century “diseases of the chest” often referred to tuberculosis, but could also refer to emphysema or bronchitis (which are now known as chronic obstructive pulmonary disease).