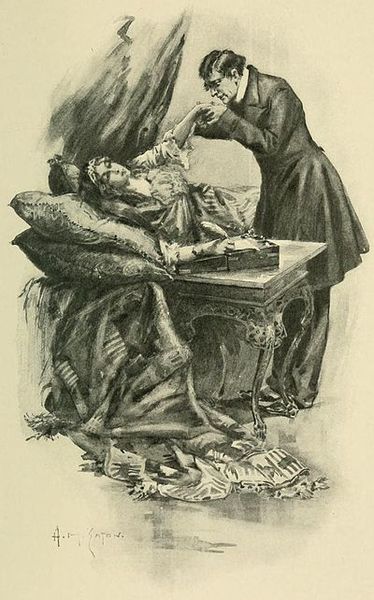 "It was a sight to see, a deed to record."  Black and white illustration of Slope bending over Signora Neroni, who lies on her invalid couch.  Illustrated by Hugh M. Eaton (New York:  the Century Co, 1902): 252.  Image courtesy Wikimedia Commons under a Creative Commons license.

Anthony Trollope’s Barchester Towers (1857), the second novel in his “Chronicles of Barsetshire” series, details the public ecclesiastic conflicts between the newly powerful Evangelicals of the Church and the reigning Tory conservatives. However, the private realm of the novel’s accompanying domestic plot offers a fascinating depiction of a physically disabled woman who captivates men with her beauty and sensuality. Signora Madeline Neroni, Trollope’s crippled seductress, forms a stark contrast to Trollope’s chaste and comparatively dull heroine, Eleanor Bold. As with many disabled women in nineteenth century novels, Madeline’s physical defect is linked to her transgressive sexuality—a physical manifestation of dubious morality. Her legs are irreparably damaged as a result of the violence of a husband who has abandoned her, and the novel seems to frame the injury as due punishment for succumbing to pre-marital sex.

Like the many disabled female figures of sexual excess Martha Stoddard Holmes describes, Madeline functions only as a catalyst to the able-bodied heroine’s romance plot before disappearing from view in order to alleviate the anxiety her body generates. Yet, as modern feminist critics note, the spectacle of Madeline’s damaged body makes Trollope’s text a key site for tracing historical links between domestic abuse, sexuality, and disability. As Kate Lawson suggests, Madeline “keep[s] the image of the maimed body before us, the tantalizing yet repellent reminder of a—perhaps–grotesque act of domestic violence. Her disfigurement is both a source of continual fascination, of curiousity, and…repulsion” (57).

Trollope describes Madeline’s defective body in shocking detail, making the reality of her damaged body visible for the reader. Yet, paradoxically, her meticulous construction of herself as beautiful, elaborately adorned, and sexually desirable depends upon her careful concealment of her crippled limbs. This consistent tension between grotesque display and mysterious veiling haunts Madeline’s character throughout the novel. Suzanne Rintoul notes that her “always only partially visible disability marks a break-down in representation and interpretation for those who work to circumscribe their identities through her abnormal body,” arguing that this “indecipherability” exposes the flaws of the community that surrounds her (7). Ultimately, the spectacle of the Signora’s body, always simultaneously hidden and revealed, invites a complex reading of female disability, agency, and the politics of display, as well as the notion of the mutilated woman’s body as evidence of unspoken violence between men and women.

She had fallen, she said, in ascending a ruin, and had fatally injured the sinews of her knee; so fatally, that when she stood she lost eight inches of her accustomed height; so fatally that when she assayed to move, she could only drag herself painfully along, with protruded hip and extended foot in a manner less graceful than that of a hunchback. She had consequently made up her mind, once and for ever, that she would never stand, and never attempt to move herself.

Stories were not slow to follow her, averring that she had been cruelly ill-used by Neroni, and that to his violence she owed her accident. Be that as it may, little had been said about her husband, but that little had made it clearly intelligible to the family that Signor Neroni was to be seen and heard of no more.

Madeline Neroni, though forced to give up all motion in the world, had no attention whatever of giving up the world itself. The beauty of her face was uninjured, and that beauty was of a peculiar kind. Her copious brown hair was worn in Grecian bandeaux[1] round her head, displaying as much as possible of her forehead and cheeks. Her forehead, though rather low, was very beautiful from its perfect contour and pearly whiteness. Her eyes were long and large, and marvelously bright; might I venture to say, bright as Lucifer’s[2], I should perhaps best express the depth of their brilliancy. They were dreadful eyes to look at, such as would absolutely deter any man of quiet mind and easy spirit from attempting a passage of arms with such foes. There was talent in them, and the fire of passion and the play of wit, but there was no love. Cruelty was there instead, and courage, a desire of masterhood, cunning, and a wish for mischief. And yet, as eyes, they were very beautiful. The eyelashes were long and perfect, and the long steady unabashed gaze, with which she would look into the face of her admirer, fascinated while it frightened him. She was a basilisk[3] from whom an ardent lover of beauty could make no escape. Her nose and mouth and teeth and chin and neck and bust were perfect, much more so at twenty-eight than they had been at eighteen. What wonder that with such charms still glowing in her face, and with such deformity destroying her figure, she should resolve to be seen, but only to be seen reclining on a sofa.

Her resolve had not been carried out without difficulty. She had still frequented the opera at Milan; she had still been seen occasionally in the saloons of the noblesse[4]; she had caused herself to be carried in and out from her carriage, and that in such a manner as in no wise to disturb her charms, disarrange her dress, or expose her deformities.

[1] A bandeaux refers to a narrow band of ribbon worn around the head, as a kind of headdress. Especially popular in Regency fashion, the ribbon could be made from a variety of materials, such as velvet or silk, and might be worn both formally and informally.

[2] Lucifer is the name given to the rebellious archangel who falls from heaven and becomes known as Satan. Here Trollope plays on the notion of the Signora’s literal and figurative “fall” from beauty and grace.

[3] Ancient writers describe the basilisk as a reptilian creature with a loud, frightening hiss and fatal breath. Like Medusa, the basilisk’s very look had the power to destroy its viewer.