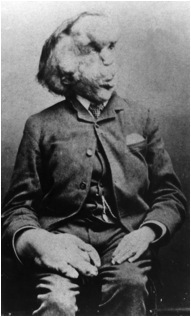 The story of Joseph Carey Merrick began in 1862, when he was born to Mary Jane and Joseph Merrick of Leicester, but the story of the Elephant Man did not start until several years later. It was when he was a toddler that tumours first appeared on Merrick's body. They continued to grow and multiply throughout his short life, the result of what is now generally understood to be Proteus Syndrome. Without modern surgical treatment, the condition eventually became so severe that it made a normal life impossible. As the autobiographical pamphlet above states, Merrick found a means of supporting himself by joining travelling 'freak shows', displaying his deformity to the public under the stage name of The Elephant Man.

While touring, Merrick composed – albeit possibly with the help of an external writer – the above statement as part of a pamphlet to be distributed to crowds at each exhibition. He later attained fame of a different sort through his relationship with Dr. Frederick Treves, whose reports to the Pathological Society of London made him a medical curiosity. Similarly, F.C. Carr Gomm, chairman of the London Hospital, sent letters to The Times requesting charitable donations to cover the cost of Merrick’s residence there in the final years of his life, and these appeals saw the former sideshow performer faced with an entirely new audience of upper-class benefactors comprised of some celebrities and even royalty.

As a result of the spectacular career pressed upon him, scholarly discussions about Merrick’s life and experiences tend to take place within frameworks focused on freakery or nineteenth century medicine rather than a wider perspective of disability history. It’s perhaps significant that most critical approaches centre on the many second-hand accounts of his life. Treves’ reports and his own autobiographical The Elephant Man and Other Reminiscences, Carr Gomm’s letters, even accounts in the diaries of those who visited Merrick while at the London Hospital: these typically combine with official documents to form the basis on which contemporary scholars analyse Merrick.

Primarily, these second-hand accounts present confused attempts to define Merrick as ‘other’, whether other-as-object or other-as-martyr. In most accounts he becomes both, and yet he is neither. Merrick is other, and yet he is also human; more accurately, he is the realization of the other within humanity, and the reflection of the limitations of binaries and boundaries which define humanity in opposition to the other. But while the contemporary accounts that refer to Merrick struggle with this reflection, the one account which at first glance seems most to struggle, Merrick’s own autobiography, in fact offers a more complete acceptance of his redefined humanity.

Despite debate over the authorship of the statement in this pamphlet, I refer to it as an autobiography because I find no evidence to convince me otherwise; Merrick was literate, and there is no concrete evidence that the pamphlet was composed by anyone else, although he may have had help with the physical act of writing. That said, confusion as to the author is understandable given the strange narrative voice that characterises the autobiography. In their critical exploration of Merrick’s narrative construction, Peter Graham and Fritz Oehlschlaeger note that the persistent detachment of the statement “might plausibly be ascribed either to an external writer... or to Merrick's own distinguishing between his essence and the misshapen 'thing' that was his body” (13).

However, to explore Merrick’s written experience as a means of understanding his own perspective on his “essence” and his “body”, it helps to consider the way in which the autobiographical pamphlet can be considered a piece of disability writing, and to examine this voice in relation to those which speak about Merrick. Mark Mossman explores the function of disability writing in relation to the disabled persons’ construction or definition of selfhood; he describes how disability writing “attempts to reclaim ownership of the body and the way the body is understood” by spinning the body’s inherent instability into “the articulation of a volitional mode of selfhood” (7).

For Mossman, “writing disability becomes an empowering act of control, a deconstructive critical strategy that attempts to break down oppressive and imprisoning cultural construction… the performance and general representation of disability is re-centered, re-focused on the disabled subject itself” (7-8). At first glance, it would appear that Merrick’s autobiography does not constitute “an empowering act of control” or a “deconstructive critical strategy,” given that Merrick seems to describe himself within the confines of stereotypes imposed on him by Treves and others. Merrick emphasises his own otherness by referring to his right hand as “almost the size and shape of an Elephant's [sic] foreleg,” and to himself as an impossible “thing”, informing readers that “no one would believe until they saw it, that such a thing could exist.”

The way that Merrick both distances and owns his body throughout his autobiography also seems not to fit under the heading of disability writing, which Mossman asserts attempts to reclaim ownership of the body. Merrick’s narrative alternates between the use “the” and “my” when referring to his body: “my head is 36 inches”, “the face is such a sight that no one could describe it”, “the right hand”, “my feet and legs”, “my body”, “my deformity.” While these fluctuations and the images of otherness that Merrick employs could be seen as an inability to reclaim his body or as evidence of an external writer, they can also be interpreted another way.

Merrick describes his body as both part of his subjectivity, claiming his embodied experience as a fundamental part of his humanity, and at the same time realizing his body as an object. His language throughout this passage reflects a subjectivity like that outlined by Ruth Robbins, in which “we are not only subjective selves... but also objective selves - selves with a material presence in the world, selves with bodies that may in fact be subject to actions and forces that we cannot control, which are in fact the objects of the actions and desires... of others” (8-9).

From this perspective, then, Merrick is not hesitating or unable to reclaim his body; he is in fact claiming ownership of his body as intertwined with his subjectivity and as distanced object. In short, he is claiming ownership of his body in a way that those whose bodies conform to the strictures of “normal” humanity cannot do, at least, not comfortably. Understanding Merrick’s autobiography as a method of reclaiming his body and his embodied subjectivity brings it more in line with disability narratives. However, rather than simply “deflect[ing]and displac[ing] the powerful gaze of the ‘norm’” (Mossman 8), Merrick’s autobiography calls the very nature of the ‘norm’ into question. The accounts written about him by others attempt to divide him into the bodily other and the human spirit, but Merrick’s autobiography denies this separation, and brings his body and his spirit together into one lived experience.

“I first saw the light on the 5th of August, 1860, I was born in Lee Street, Wharf Street, Leicester. The deformity which I am now exhibiting was caused by my mother being frightened by an Elephant; my mother was going along the street when a procession of Animals were passing by, there was a terrible crush of people to see them, and unfortunately she was pushed under the Elephant's feet, which frightened her very much; this occurring during a time of pregnancy was the cause of my deformity.

The measurement around my head is 36 inches, there is a large substance of flesh at the back as large as a breakfast cup, the other part in a manner of speaking is like hills and valleys, all lumped together, while the face is such a sight that no one could describe it. The right hand is almost the size and shape of an Elephant's foreleg, measuring 12 inches round the wrist and 5 inches round one of the fingers; the other hand and arm is no larger than that of a girl ten years of age, although it is well proportioned. My feet and legs are covered with thick lumpy skin, also my body, like that of an Elephant, and almost the same colour, in fact, no one would believe until they saw it, that such a thing could exist. It was not perceived much at birth, but began to develop itself when at the age of 5 years.

I went to school like other children until I was about 11 or 12 years of age, when the greatest misfortune of my life occurred, namely - the death of my mother, peace to her, she was a good mother to me; after she died my father broke up his home and went to lodgings; unfortunately for me he married his landlady; henceforth I never had one moment's comfort, she having children of her own, and I not being so handsome as they, together with my deformity, she was the means of making my life a perfect misery; lame and deformed as I was, I ran, or rather walked away from home two or three times, but suppose father had some spark of parental feeling left, so he induced me to return home again. The best friend I had in those days was my father's brother, Mr. Merrick, hair Dresser, Church Gate, Leicester.

When about 13 years old, nothing would satisfy my step-mother until she got me out to work; I obtained employment at Messrs. Freeman's Cigar Manufacturers, and worked there about two years, but my right hand got too heavy for making cigars, so I had to leave them.

I was sent about the town to see if I could procure work, but being lame and deformed no one would employ me; when I went home for my meals, my step-mother used to say I had not been to seek for work. I was taunted and sneered at so that I would not go home for my meals, and used to stay in the streets with an hungry belly rather than return for anything to eat, what few half-meals I did have, I was taunted with the remark – ‘That's more than you have earned.’

Being unable to get employment my father got me a pedlar's license to hawk the town, but being deformed, people would not come to the door to buy my wares. In consequence of my ill luck my life was again made a misery to me, so that I again ran away and went hawking on my own account, but my deformity had grown to such an extent, so that I could not move about the town without having a crowd of people gather around me. I then went into the infirmary at Leicester, where I remained for two or three years, when I had to undergo an operation on my face, having three or four ounces of flesh cut away; so thought I, I'll get my living by being exhibited about the country. Knowing Mr. Sam Torr, Gladstone Vaults, Wharf Street, Leicester, went in for Novelties, I wrote to him, he came to see me, and soon arranged matters, recommending me to Mr. Ellis, Bee-hive Inn, Nottingham, from whom I received the greatest kindness and attention.

In making my first appearance before the public, who have treated me well -- in fact I may say I am as comfortable now as I was uncomfortable before. I must now bid my kind readers adieu.”