The Pillars of the House 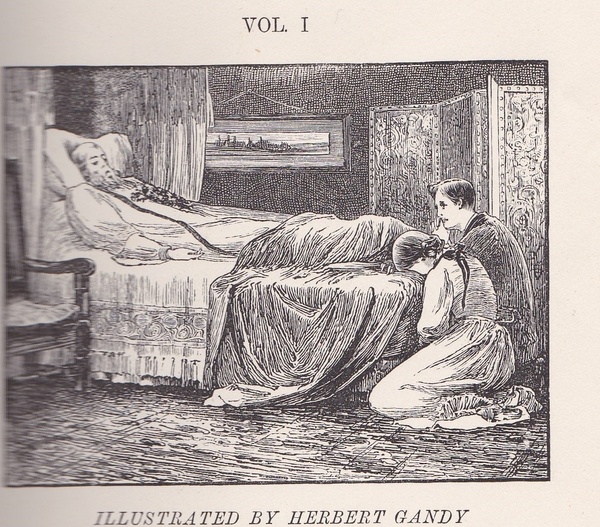 The frontispiece of The Pillars of the House, Vol.I, Herbert Gandy, shows Felix and Wilmet kneeling at the foot of their father's deathbed.

One of Charlotte M. Yonge’s last great family sagas, The Pillars of the House (1873) prominently features disability. Several of the thirteen orphaned Underwood siblings experience disability or chronic illness: Felix, the eldest, struggles against the weakness of the lungs he has inherited from his father, who died of tuberculosis; his younger sister Geraldine has a tubercular ankle, which impairs her mobility and ultimately causes her to have her foot amputated; and the youngest brother, Theodore, is deaf, mute and developmentally disabled.

The novel’s attitude towards disability and impairment is captured in the family motto, which Yonge included as a subtitle,  “Under Wode, Under Rode”. The dying Reverend Underwood explains this to Felix, on his death-bed: “ ‘Bear thy cross, and thy cross will bear thee, like little Geraldine’s cross potent – Rod and Rood, Cross and Crutch – all the same etymologically and veritably.’” (1.35) This image of the Cross as prosthesis indicates the central place disability came to have in Yonge’s understanding of Christian experience.

Having said this, Yonge’s representation of disabled characters in The Pillars of the House is highly various, and while physical suffering is clearly shown to be spiritually salutary, Geraldine Underwood is no saintly invalid. Although Geraldine refers to her diseased ankle as her “cross” (1.357), she does not endure pain passively: instead, she chooses to have her foot amputated, so that she can play a more active role in the family home. In fact, domesticity does not turn out to be her true calling, and she pursues her artistic talents, eventually going to stay in London to study art, and having her paintings successfully displayed at the Royal Academy. While she is in London, she receives a proposal of marriage from her new friend, the wealthy and distinguished sculptor Mr. Grinstead, which she refuses.[1] The extract below is taken from the scene in which she informs Felix of her decision.

What is striking in this passage is that Geraldine appears to cite her disability as a reason not to marry, primarily in order to justify a decision she has already made for other reasons. As the scene develops, it becomes clear that she does not want to leave her adored brother Felix, nor to give up her new-found career as an artist. Disabled women are rarely depicted as marriageable in novels of this period,[2] but in this episode, Yonge represents Grinstead as being deeply in love with Geraldine, and Geraldine’s refusal as stemming from her aversion to the match, rather than from a sense of inferiority. While the heroine of Dinah Mulock Craik’s 1850 novel Olive, another disabled artist, can be seen to overcome her self-hatred through her marriage, Geraldine Underwood asserts herself in this refusal scene, and is shown to be “peaceful and happy” (2.172) in her chosen life as a celibate artist and sister.

[1] In the sequel to The Pillars of the House, The Long Vacation (1895), Geraldine is shown to have married Mr. Grinstead many years later, after Felix’s death.

[2] For a discussion of this, see Martha Stoddard Holmes, Fictions of Affliction: Physical Disability in Victorian Culture (Ann Arbor: University of Michigan Press, 2004)

Felix found Geraldine cowering down in her chair, with her hands clasped together over her forehead. She looked up at him, as if startled by his entrance.  ‘O Felix, how could you?’ broke from her.

‘My dear, I could not help it. Has it been so very distressing?’

‘Oh!’ with a great gasp, ‘I’m sure to refuse a man is the most horrible thing in the world – except to accept him!And such a man too – so great and good and kind. You shouldn’t have let him do it, Felix.’

‘Don’t scold me, Cherry; how was I to know you would not like it?’

‘Well, that’s decisive,’ said Felix, laughing at the tone; ‘but, indeed, I did think you admired him very much.’

‘So I do – but not in that way – not so as to bear to see him lower himself – and – and have to grieve him –’ and the tears started from her eyes. ‘But you know, he only could have done it because he saw a poor little lame thing and wanted to take care of her.’

‘I think it goes a good deal deeper than that, Cherry.’

‘I’m very sorry,’ said Cherry. ‘How very disagreeable it is that such things will happen; I thought, at any rate, that I was safe from them; and he was such an old man, and such a kind friend, that I was so proud of; and now I have vexed him so – and it is all over.’

‘Do you really regret it? are you sure you did not speak only in the first surprise?’

‘Cherry dear, don’t you think we ought to look at it reasonably? If you do not feel as if you cared for him – like a novel – yet still –’

‘Hush, Felix! he is much too good to be accepted any other way.’

‘I am not sure that he thinks so.’

‘I do, then!’ said Cherry, raising her head up indignantly. ‘I should be ashamed to marry a man without! A lame, sickly, fretful thing like me ought to bring real love at least, to make up to a man for being bothered with her. Come, Felix, have done talking sensible nonsense! I know you don’t wish it, so don’t pretend.’

‘I am making no pretence. It would be a dreadful business for me; but at the more I think I ought to make you consider.’

‘Consider! Oh! I’ll consider fast enough; that beautiful drawing-room, with the statues, and the conservatory – and a carriage – and going to Italy! Do you think I am going to be bribed by things like that?’

‘As if one wanted one’s husband to be fatherly! [...] I like him, I tell you; but not so much as the tip of your little finger!’

‘Felix! You don’t want to get rid of me? I know you were right to argue with Wilmet,[2] and persuade her, because she had let her heart go, and only was afraid to acknowledge it; but mine isn’t gone, and couldn’t go. If I had not learnt to work, and had not a work to do, I might try to think of freeing you from a burthen; but now that I have, why should I upset it all, and wrench myself away from you? When I lean against you, I have got my home, and my rest, and all I want here. I never go away from you but I feel that I do want you so; and when one feels that, what’s the use of looking out for somebody else?’

‘Dear little Sweetheart! Yes!’ as she lay contentedly against him, with his arm round her; ‘it only makes me tremble that you should give up a home like that, and risk so much upon my one life. [...]’

‘I should love you better dead that any other man alive!’ cried Cherry impetuously. ‘I won’t do it, Felix! so spare your dutiful remonstrances! I do hate them so, and I know you don’t mean them!’

[2] Wilmet is the eldest sister in the family, who has already become engaged, and is subsequently married.